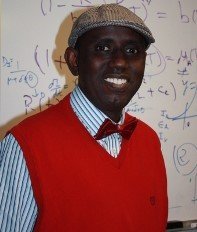 Dr. Gumel works in the fields of applied nonlinear dynamical systems (bifurcation theory), mathematical biology and computational mathematics. His work is primarily focused on the use of mathematical approaches to gain insight into the transmission dynamics and control of emerging and re-emerging diseases of public health importance. His recent work addresses the problem of the effect of changes in climatic variables, such as temperature and rainfall, on the ecology and epidemiology of vector-borne diseases. He has co-authored over 150 peer-reviewed research papers and three edited books.

Dr. Gumel is a Fellow of ASU-Santa Fe Institute for Biosocial Complex Systems, African Academy of Science (FAAS) and Nigerian Academy of Science (FAS). He received numerous research awards and honors, including the 2004 Rh Award for Excellence in Interdisciplinary Research and Scholarship (the highest research award given to junior faculty at the University of Manitoba) and four merit awards for research excellence at the University of Manitoba (2007, 2008, 2009, 2010). Dr. Gumel serves on the editorial board of numerous journals.

Professor Gumel is actively involved in numerous science and technology capacity building efforts in the continent of Africa, notably via the Africa Institute of Science and Technology project (a pan African projected, spearheaded by the Nelson Mandela Institution, aimed at building world-class centers of academic excellence in research and training in science and technology across Africa), the US-Africa Biomath Initiative and the African Mathematical Institutes Network.